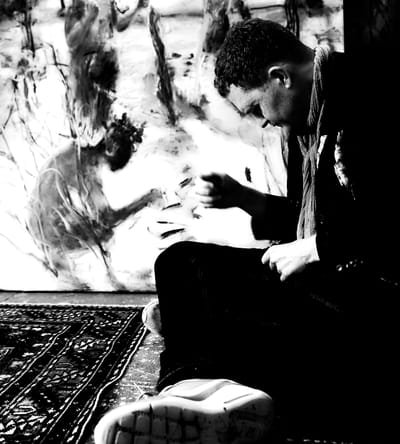 Given the ubiquitous influence of photography and photographic reproduction of our era, Armin Völckers has consciously sought to distance, to the furthest extent, any compositional element which may be misconstrued with that of photography. Far from the photographic density, reductive nature of the technological image, without evidence of restricted plane, or the arid granular disposition of negative and paper, he yet aspires to a sense of realism. The artist‘s preference to incline towards realism is in effect, due to his adverse stance to both disfiguration and distortion, an aversion which extends to the use of collage and “quotation”. His conscious enquiry, to locate within the brush and that depicted in it’s use, elements within the process, wherein brushwork is a cartography which resonates with the geometry hidden in life, hidden in the mundane. The isolation of the brushstroke is aligned with dark memory, that which obstructs the truth of light, the mnemonic tapestry of the unconscious ruptures which each singular recollection, every applied stroke of paint. The evasive character of this truth,  obscured within process and by life, of those thoughts nearly grasped prior the arrival of sleep, those attempted to capture, yet scarcely either imagined or real at the time of waking: a fraction of time indivisible to “thought”. Here, at this juncture of the concrete and imaginary, where “thought” fails, where the conscious mind has lost, is where the artistic fascination begins. The artist is highly conscious of the fact of a betrayal of intent, what he has often begun, the initial quest to paint something, born of concrete ideas, is yet destroyed, a gradual erasure of the real for a more intrinsic discovery. This process, an “anti-art” or process of the negation of the imagined with the real, the real with the imagined, not dissimilar to that of Auerbach, despite the radically different result in the experimentation.

The evidence is upon the canvas, like a once distant memory transformed, sublimated by the act of painting rather than the unconscious, either form, linear, spatial in quality. The result is a point of intellectual and visual focus, the painter has come to observe, with similarly absurd quotient, the evident and immaterial, the ambiguity of what has been revealed in the artistic process. What is discerned, and delighted in, is the sense of the transformative, of the object and ocular, a painting never appearing quite the same in the experience of viewing,that a painting is not static and the varying strokes and textures appear fluid rather than indelibly fixed.  The point of arrival insists on dissolution, wherein the realism or aesthetic virtue of realism pales, accident and non-intent surface, brushwork testament to an ephemeral transitory truth, the sight of the painting echoes their origin. Accidence has come to equate with the truth, and the depiction of scenes drawn from pedestrian realities, natural vistas and urban situations resonate with the chaotic impetus of his mission.